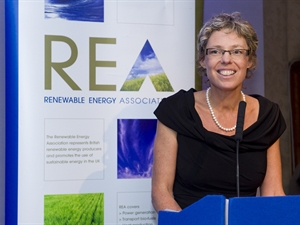 Hosted by UK BIG Lottery Fund Chairman, Peter Ainsworth, the Awards named Windelectric’s Peter Edwards and Godfrey Bevan, one of the founders of the REA, as joint Champions for their outstanding lifetime contribution towards renewables. John Baldwin was also commended for his dedication and ongoing commitment to AD and biomethane.

REA’s Chief Executive, Gaynor Hartnell (pictured right), commented;
“These awards recognise outstanding achievement in the British renewable energy sector. They are a tribute to innovation and excellence. The exceptional quality of all the shortlisted entries serves to demonstrate the exacting standards, talent and originality within this industry.”

The REA had received a record amount of over two hundred nominations for this year’s Awards. We would like to thank all those who participated - your effort and dedication to this vibrant and growing sector is inspiring.
The full list of the Award winners and runners up are listed below: