In March 2016 the Renewable Energy Consumer Code (RECC) published a report on the compliance of performance estimates given to domestic consumers for the three Microgeneration Certification Scheme (MCS) heat technologies – heat pumps, biomass and solar thermal. The analysis measured the performance estimates against industry standards as defined by MCS and by RECC.

That evidence from RECC’s research found that many estimates presented confusing and sometimes misleading information about both potential performance and financial savings/income.

This paper updates the above research for heat pumps only and places a new analysis within the context of changes to the MCS Heat Pumps standard agreed in January 2017 (Section 2 below).

In light of the recent revision of the MCS standard, and noted by the MCS Heat Pumps Technical Working Group, RECC will undertake further monitoring of installer practice at the pre-contractual stage. RECC members must comply with relevant MCS Standards related to performance estimates.

Further research on the pre-contractual information given to consumers will include:

Input from other stakeholders on RECC’s monitoring is welcome.

The new version of the MIS 3005 is expected to become compulsory in October 2017 . The new standard includes a range of technical, process and administrative changes that will impact on consumer protection. The following are the most significant.

Compulsory Performance Estimate
RECC has argued for the introduction of a standard compulsory template for heat pump performance estimates since our original research on performance information was published in 2016. The new compulsory template is in the form of an Excel file that automatically calculates the running costs, savings and RHI income depending on a range of values entered by the installer. The energy demand is obtained from the consumer’s EPC. Installers will have to give this completed template to consumers before contract agreement.

Contract agreement before survey
The new version of the standard no longer requires installers to carry out a full room-by-room heat loss assessment at the pre-contract stage. Contract agreements that change significantly after the home survey will be subject to a variation of contract. As contracts can now be agreed before the full technical survey is carried out, RECC predicts that some installers will be more likely to use sales agents for home selling. Home selling was, and still is, widely used in the Solar PV market and RECC is concerned that this may lead to more non-compliant sales practice.

The compulsory use of SCOP data
The calculations in the new performance estimate template are based on Seasonal Coefficient of Performance (SCOP) values obtained from the MCS website. Installers then paste the SCOP data into the new compulsory performance estimate spreadsheet and. The SCOP value in the spreadsheet is used to calculate the heat pump efficiency and the expected RHI. In response to widespread concern about the use of SCOP values to estimate in-situ performance, the new estimate template includes a warning/disclaimer regarding the accuracy of the performance information based on SCOP.

This year our analysis has included 12 performance estimates from a wide range of companies from the across the UK. The estimates were assessed using the RECC performance information compliance tool as a consistent check. The procedure used by RECC to select companies for audits and spot checks is risk-based which means that the companies included in this report are not a random sample of RECC members. The sample does, however, reflect the experience of a significant proportion of domestic customers because the companies selected for audit tend to be larger.

Four relatively large companies are included in this analysis (Table 1 below) – one of those companies is responsible for PE4 and 5. Performance estimates 10, 11 and 12 were issued by a different large company in 2016 when it deployed home selling. That same company then radically changed its business model and PE’s 8 and 9 are more recent.

It is also important to note that each proposal analysed is likely to reflect typical practice for that whole company at the time. The performance estimates described in this report therefore reflect the business models deployed by the installers and the broad experience of the customers during that period.

Compliance with the main MCS and RECC requirements is summarized in Table 1. Green indicates compliant practice; red indicates non-compliance and orange partial compliance (or compliance was not clear). 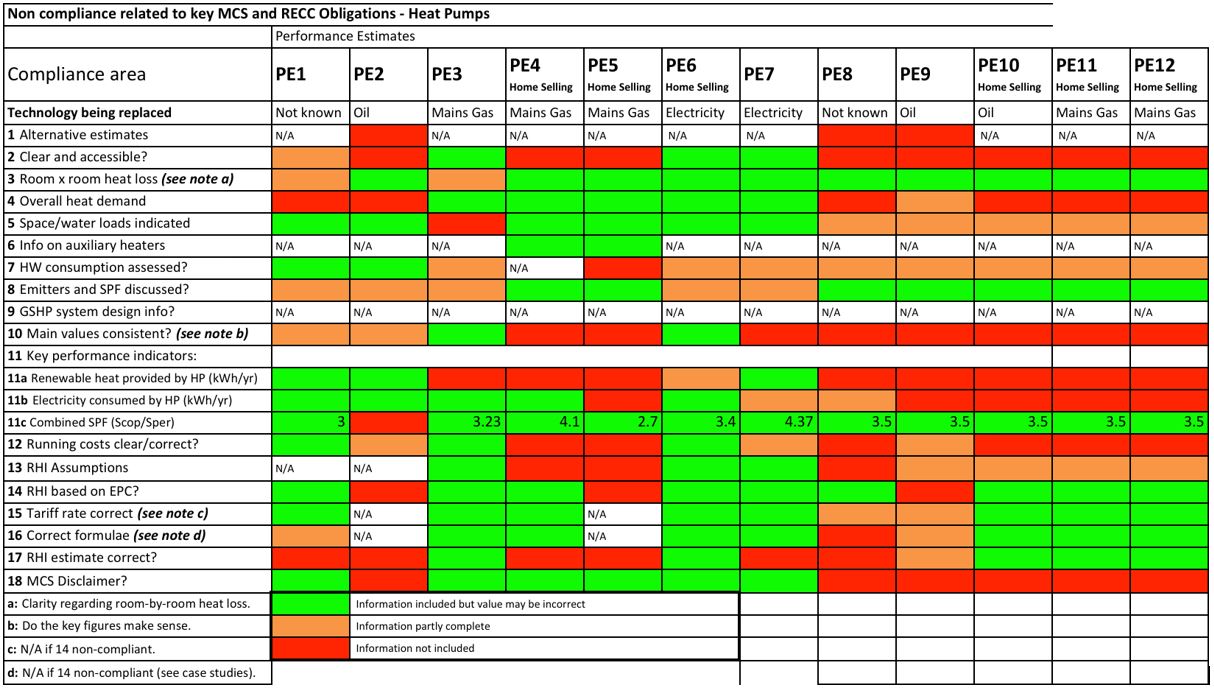 The main findings of this analysis are summarised below.

Only four estimates included all of those values (four companies).

Performance
Table 1 indicates the various SCOPs predicted by the installers (compliance area 11c). Most predicted performance at 3.5 or above although one company was incorrectly using a SCOP at 3.5 as a default (for all installs). Two other estimates included predictions that were higher than SCOP 4.

Financial performance – all examples below assume the predicted SCOP performance will accurately reflect in-situ performance
Five estimates were for systems that would replace mains gas. Although the RHI is eligible for systems that do replace gas, BEIS makes it clear that the RHI is primarily targeted at homes that are off the gas grid. One example of marginal benefit relates to Performance Estimate 3:

The company’s current gas heating cost assumes a unit rate of 5.12p/kWh.
A lower unit rate of 4p/kWh would give current annual costs of £592 and the heat pump would give an annual saving of £65.

Misleading information is given in some of the other estimates for mains gas substitution.

The benefits are overstated.
Firstly, the consumer’s current fuel costs are based on 20749kWh when the heat pump running cost is based on 76% of the EPC demand figure of 18363kWh (energy required to run pump = 3395kWh).
Secondly, the £435 ‘running costs’ is only the cost of running the pump and fails to include £272 additional costs (providing heating not provided by HP). The actual total run cost would be £707.  Leaving an estimated annual fuel saving of less than £122 - not £394.
Thirdly – the total RHI income is given as £5467. Total annual savings £394. Total payback calculated as 17 years.
As actual fuel saving would be less than £122 the actual payback period would be over 50 years.

Heat pump replacement of other technologies.

The company HP running cost is not consistent with the total heat demand and SCOP.
Based on the 32262kWh demand the energy for the pump would be 9217kWh costing £1198 at around 13p/kWh.
This indicates that the Heat Pump system would result in an increase in fuel costs of £198 pa based on customer current fuel costs of 3p/kWh.
These figures imply no payback.
If above is re-calculated based on a current fuel oil cost of 4p/kWh then existing spend would be: £1290. In that scenario the HP would offer an annual saving of £92 implying a payback of 19 years. (Or 10 years if based on HP costs of 12p/kWh) 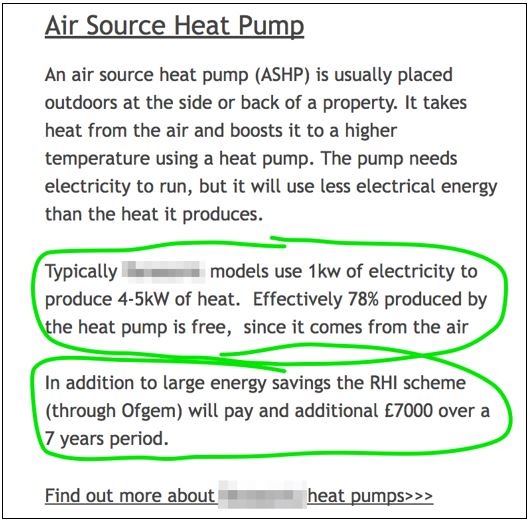 Example 1 (above) - Potentially misleading. The ad claims an efficiency of between 4-5kW of heat for every 1kW of electricity used and that this means that 78% of the energy output will be free. This claim is extremely misleading because that benefit will not be achieved in the vast majority of installations because the exact efficiency achieved in-situ depends on a range of factors specific to individual properties. The second claim that the annual income available is at least £1000 per annum is also incorrect because RHI income depends entirely on the EPC heat demand.

Example 2 - Potentially misleading. As above, the claim that this specific heat pump can deliver ‘about’ 5kWh of ‘usable heat’ for every kWh of electricity consumption is misleading.

Example 3 - Misleading. This example is misleading because it asserts that heat pumps deliver ‘around’ 5kWh of ‘usable heat’ for every 1kWh of input. The statement ‘this means approximately 4/5 of the required heat is free!’ is not correct. The actual efficiency achieved will depend on the specifics of the property.

Example 4 - Misleading. As above, the actual ratio of heat produced versus electricity consumed depends on the property. The vast majority of installations do not achieve savings of 70% and, in many cases, savings on energy spend may be impossible without significant home improvement work.

Example 5 (above) - Misleading. The claim that a heat pump can mean a household can save up to 78% on ‘energy’ is not correct.

Example 6 (above) and 7 (below) – Potentially Misleading. These claim are potentially damaging because they directly target households on the gas grid. Most gas consumers are unlikely to see any significant benefit. The problems related to Example 7 (below) are compounded by the claim that heat pumps can convert 1kWh of input energy into an average of 3.8 kWh of heat. This implies that this is an average level of actual performance when the vast majority of installations will not achieve this in-situ. 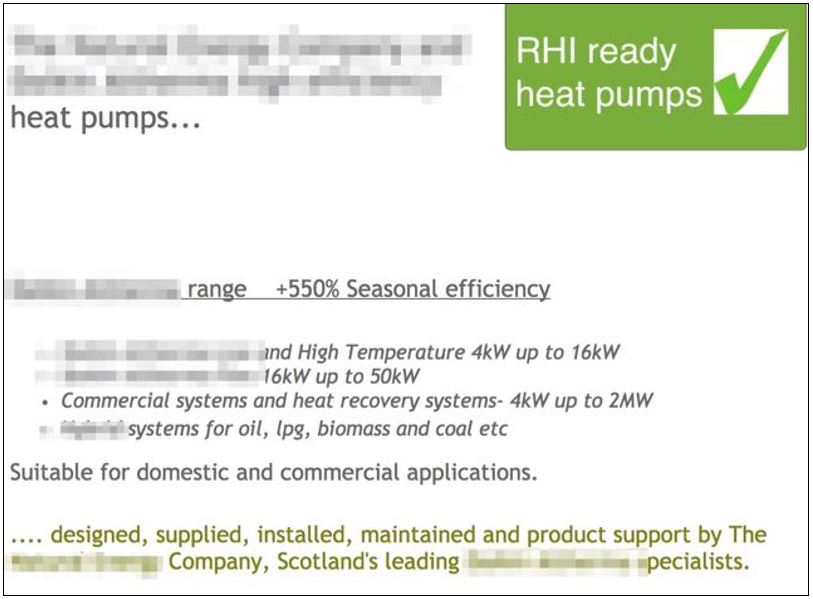 Example 8 - Misleading. Again, this example implies that most – if not all – heat pump installations will achieve a specific level of performance. In this case a ‘seasonal efficiency’ of 550%. That level of performance will be impossible in almost all domestic scenarios.

RECC’s first report on the performance information provided by MCS certified installers found that performance estimates offered to consumers were often inaccurate and were sometimes extremely misleading. The results from our 2017 analysis (described above) are similar. Only four of the 12 estimates examined were clear and accessible and only four include the three critical values consumers need to make an informed choice: the overall demand, the electricity consumed by the pump and the predicted SCOP.

This year we took the analysis a step further and scrutinised the financial forecasts provided. As Section 4 (above) indicates, some of those forecasts were extremely misleading. For example, several estimates indicate a ‘payback’ period of between 10 and 20 years. But the claims in those estimates were based on inaccurate or exaggerated performance values. Our calculations found that the accumulated savings and RHI income would not match the installation cost for many decades. In other words – the payback period would exceed the life of the heat pump.

The results from our 2017 assessment (above) reinforce that conclusion. The analyses carried out by RECC in 2016 and 2017 show that some companies do get it right.  Those companies have clear processes for compliant practice and tend to use standard formatted quote documents that have clear fields for defined values. Some consumers are given excellent information and are able to make an informed choice. But, as RECC stated last year, many RECC member companies are frustrated to see other installers in the market clearly operating outside the MCS standards.

Markets improve when consumers can make informed choices. To that end, RECC is now working on strategies to improve installer practice on pre-contractual information. For example, we have demanded the introduction of standard Performance Estimate Templates (PET) across the heat technologies. Such a template is being made compulsory under the new MCS heat pumps standard finalised earlier this year and due for implementation before 2018. RECC is, however, concerned about the potential adverse impact of other changes included in the new standard. The new standard, for instance, will allow installers to agree contracts before the full technical survey is carried out. RECC predicts that this may result in more home selling. Home selling was, and still is, widely used in the Solar PV market and is linked to pressure selling tactics that are illegal.

While the introduction of the PET is welcomed by RECC, non-compliance may now shift to supporting advertising deployed by installers. RECC has highlighted non-compliant examples above and will continue to monitor the pre-contractual marketing and formal performance information offered to consumers under the new MCS standard for heat pumps.