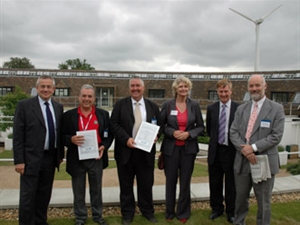 Energy Minister Malcolm Wicks MP officially launched the REAL Assurance Scheme on 14 June 2006. Welcoming the initiative, the Minister said the Consumer Code would offer consumers the assurance they need before, during and after they purchase microgeneration equipment for their homes.

"It is important as the industry develops that others who want to do likewise have faith in the products and companies who will fit these new types of technologies," the Minister stressed in his speech. “The Scheme is being launched at a time when Government is promoting microgeneration as an essential part of our future energy strategy.”

During the launch the Minister presented the first two members of the REAL Assurance Scheme with their Certificates of Membership. They were presented to Andy Honey from Microgeneration and Martin Curtis from Bioenergy Technology. The Minister later toured the award-winning zero-carbon HQ of Renewable Energy Systems Ltd to see the range of renewable energy technologies installed on the seven hectare site.